This is not a room sheet. I simply wanted to share some ideas about João's work and I think that this may be the right format, but it probably isn’t. I'm not sure whether João fully identifies with my ideas about his work. But he's an artist and that's how it works - it's part of the game. When I play this game with his work I never know the extent to which I’m actually manipulating the rules. It's like finding a deck of cards in the middle of the street and being asked to play, or bumping into someone in the street who you know from TV. This isn’t a question of mistakes, but displacement – seeing something familiar in a different context, or something that you think you know but the codes have changed.

João has a voracious visual appetite - he’s hungry as a wolf. I would even say that he has a vocation for appropriation, but I think (indeed I’m sure) that we’re not talking about appropriation in the conventional artistic sense. We’re not talking about Dadaism, or Pop Art (perhaps just a little bit). I think it’s something different, not the opposite, but that exists side by side. It has much more to do with life and reality than with any conceptual exercise. Rather than using the term “appropriation”, we could talk about re-signification, personal re-signification, even emotional re-signification, of things around us. I’m not talking about filling a void with a new meaning, nor about a process of negotiation between things and their agreed meaning. I’m talking about comings and goings, something between revolutionary theft and a poster printed in a magazine that people then put in their bedrooms. Street fighter.

Things that are appropriated (or re-signified) are far from being empty. They are often aggressively or surreptitiously ideological – as things that were made to have a specific, non-negotiable meaning. That’s what I was trying to explain: a re-signification, above all emotional, of these signifiers, is a way of dealing with these monsters. Only this kind of sensitivity can erode this unilateral dimension of the corporate production of symbols. I think this refusal of universality is important. João needs to steal these things because they are part of his life and now belong to him. They are his amulets. They mean whatever he wants them to mean, or, removing this conscious dimension, they start to signify something else, simply because they belong to him and form part of his life. What do YOU ​​represent ?? !!

Patterns drawn anonymously in a textile factory department to be used on bed sheets or bus seats become a backdrop for micro-events, journeys or sleepless nights, rather like the geometric monotony of monochrome tiles or the shiny covers of recordable VHS tapes. The mix of colours conceived to identify a specific cassette brand now identify the experience of the film that has been recorded, rather than the brand’s corporate image. Colours and shapes simply become conductors, like electric wires, where the current flows in two directions, or even non-communicating vessels, as if they had been insulated by thick layers of rubber. References to art enter the work, sometimes in an absolutely honest manner, due to genuine admiration, sometimes in an absolutely absurd manner, due to the number of times they have been filtered and distilled by reality, as if they could be used to produce an inverted visual historiography between the pattern of the bus seat covers and the first modernist paintings. Either way, depending on where you look, the distance between a Frank Stella painting and a sticker may be minimal.

One of the works in this exhibition has tremendous metaphorical capacity and offers an exemplary insight into João's work. A metal pole that has been painted yellow vertically occupies the gallery space, from floor to ceiling. The line should be straight but it has been twisted. The form clearly resembles a pole that people hold in the metro to avoid falling over. This entire sculpture is made to look like a pole. And the twist (just like the bifurcations that begin to appear in the poles) were probably designed by a team that was attempting to solve a problem. A two-metre pole can normally only be used by two or three people. But this twist, this structural deformation, increases the contact zone between the object and the people, which I think is important. Deviations, twists, repetitions, patterns, and João's working methods in general, like the design of the pole, serve to increase the contact area between abstract forms and people, who continue their journey and probably normally ignore the pole as they are looking at their mobile phones. 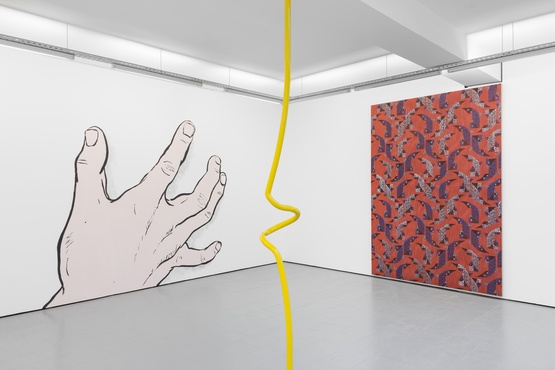 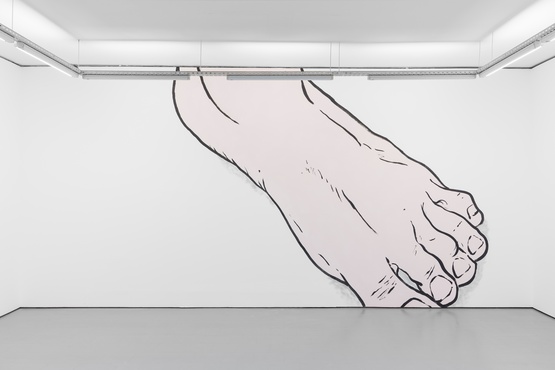 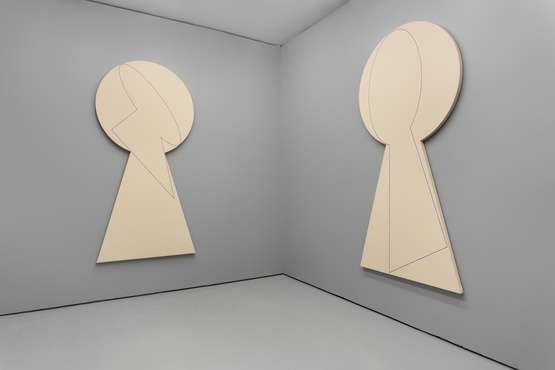 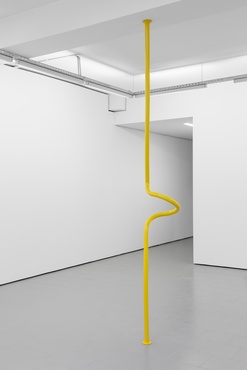 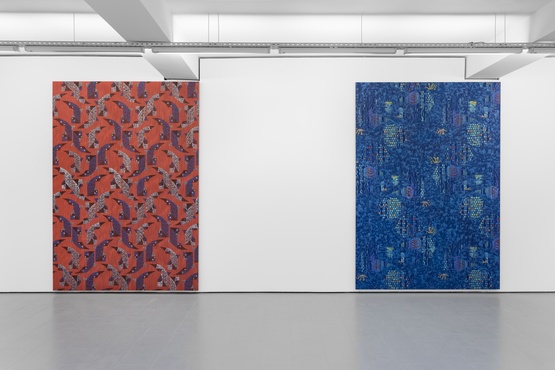 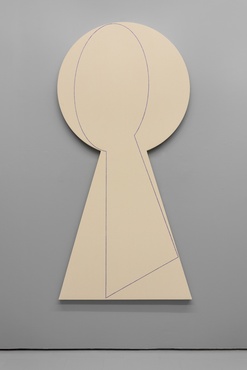 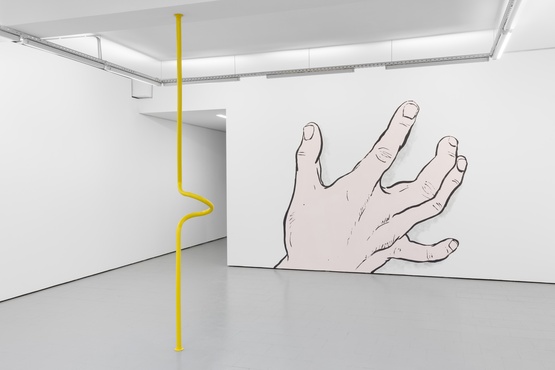 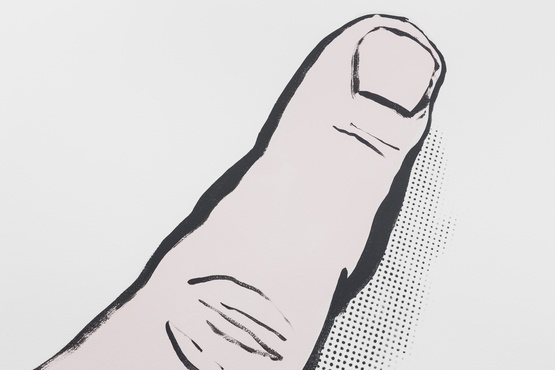 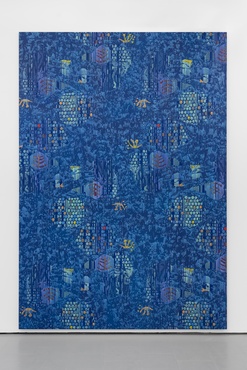 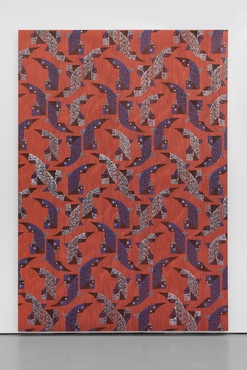 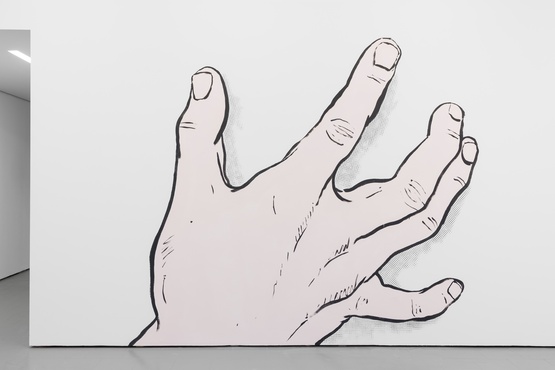 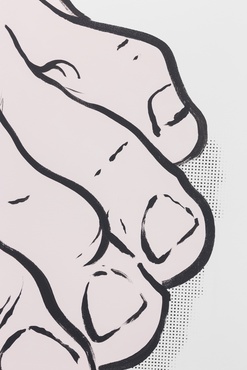 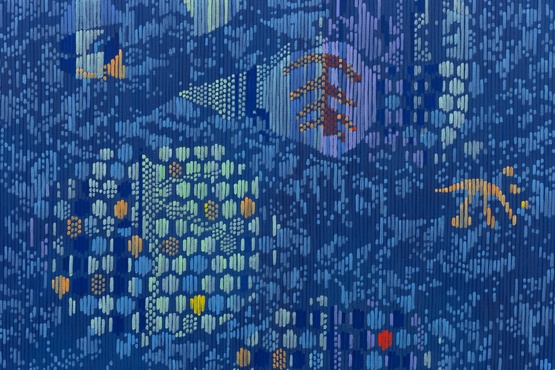 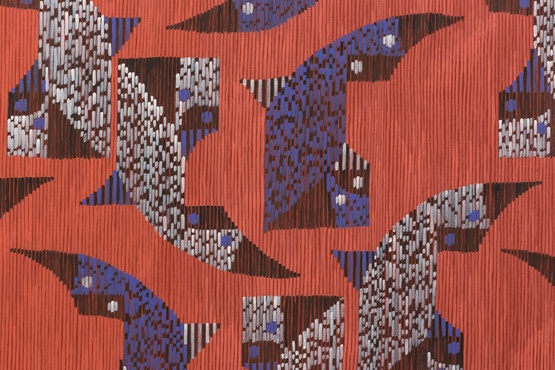