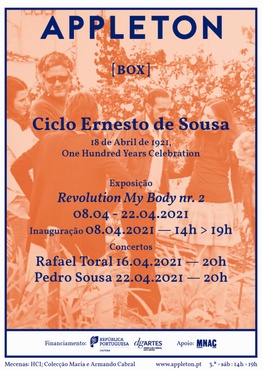 Centenary of Ernesto de Sousa celebrated  at the  Appleton Associação CulturalThe Appleton Associação Cultural presents the Ernesto de Sousa Cycle from April 8 to 22, to celebrate the centenary of this free and experimental artist, who dedicated himself to the study, dissemination and practice of the arts, criticism and essay, photography, cinema , curatorship and theater, a program divided between the before and after the day of his birthday, on April 18th.

The Cycle staarts with the opening of the Revolution My Body no. 2, a 1976 work that consists of the projection of a film in Super8 and that invites the public to intervene on 3 sheets of paper / screen.

On Sunday, April 18, the date on which Ernesto de Sousa would celebrate his 100th birthday, Appleton will be exceptionally open between 10 am and 1 pm, so that the public can attend a special intervention in the work.

That same day, the first episode of the third season of the Appleton Podcast will be released, which will be a conversation dedicated to Ernesto de Sousa and his centenary between David Maranha, Isabel Alves and Vera Appleton.

This celebration also includes solo performances by Rafael Toral and Pedro Sousa, on April 16 and 22 - (7 pm to 9 pm continuously)  respectively. These two artists received the Ernesto Sousa Scholarship (BES) and best represent the spirit of this initiative, which for 20 years has continued the work of dissemination to which it has always dedicated itself. Rafael Toral was the second to receive this scholarship, in 1994, and Pedro Sousa was the last recipient of this initiative that inspired several generations of Portuguese experimentalism and avant-garde in carrying out intermedia projects in residence at the Experimental Intermedia Foundation, New York, with the support from FLAD and Fundação Calouste Gulbenkian 1992-2013.